Ever wondered what inflation is? The textbook is noted as the sustained increase in average prices for goods and services in a given country. So, the term ‘inflation rate simply means the rate at which prices go up over time.

If you live in London for example, you will likely have experienced yearly price hikes on the London Underground, buses and most other TfL services. These hikes are set in line with the rate of inflation, which usually lies in the 2 to 3% range annually.

What are the causes of inflation?

There is no single cause for inflation, however, economists and academics have come up with a few theories.

One such theory suggests that in fast growing economies, inflation is created by a general increase in supply and demand for goods and services, resulting in prices being increased. Simply put, the more demand there is, the more people are willing to pay.

In the developed world, another theory argues that rising costs for companies results in higher prices for their products. This happens because, in general, most companies want to maintain their profit margins in order to sustain their business.

How much is my money worth?

Since inflation causes prices to rise over time, your money gradually loses value. Here is another way to think about this:

How to make the most of inflation?

So far, we’ve seen how inflation makes prices rise, while at the same time decreasing your money’s purchasing power. But it isn’t all bad news! Since the value of money goes down over time, this is a perfect opportunity to consider borrowing at a fixed rate. Here’s how it works: 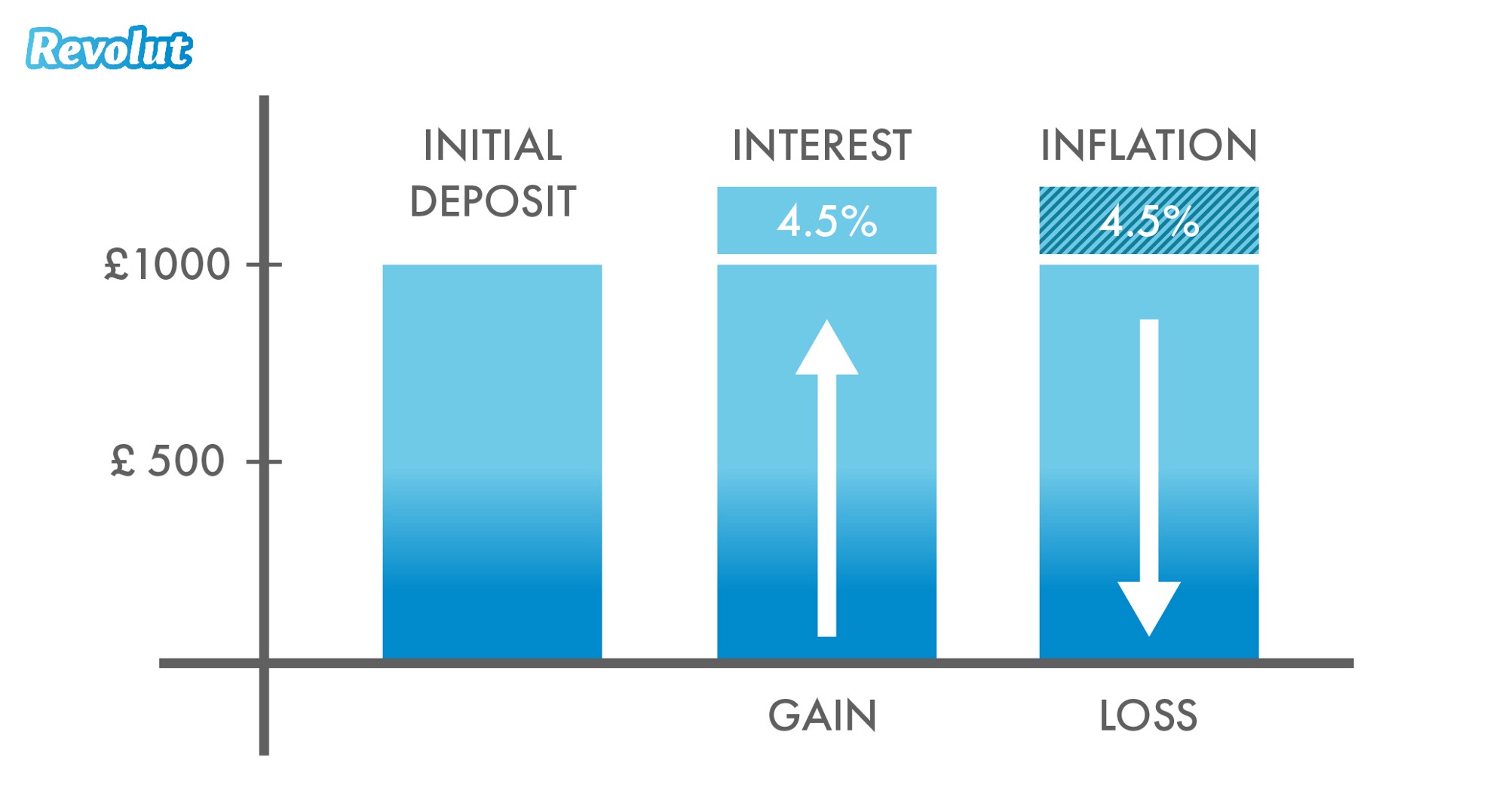 Let’s assume John takes out a one-year loan for £1,000 at 4.5% fixed annual interest. At the end of the loan period, he will have to pay back £1,045. However, if inflation for the year was also 4.5%, John would only have to pay back the initial £1,000 he borrowed, because the interest rate is offset by inflation —in theory, this is the equivalent of borrowing money interest-free!

Let’s now consider what happens if inflation was even higher, let’s say 6.5%. Since the interest rate is less than that of inflation, the cost of John’s loan would actually be 2% cheaper (6.5% - 4.5%). John could effectively borrow £1000 today and only pay back £980, which means that in one year, John has theoretically gained £20!

What should I watch out for?

While inflation positively impacts borrowing, the opposite is true for lenders and savers, as inflation negatively affects the future value of money. This means that a pound saved today will be worth less tomorrow. So unless interest rates are higher than inflation, savers will lose money.

Since interest rates have been kept at record lows in recent times, putting money into a savings account offering up to 1% is not the most effective use for your hard earned cash. This is because the Bank of England have recently announced that the inflation rate is due to rise to almost 3%. Let’s do the math: 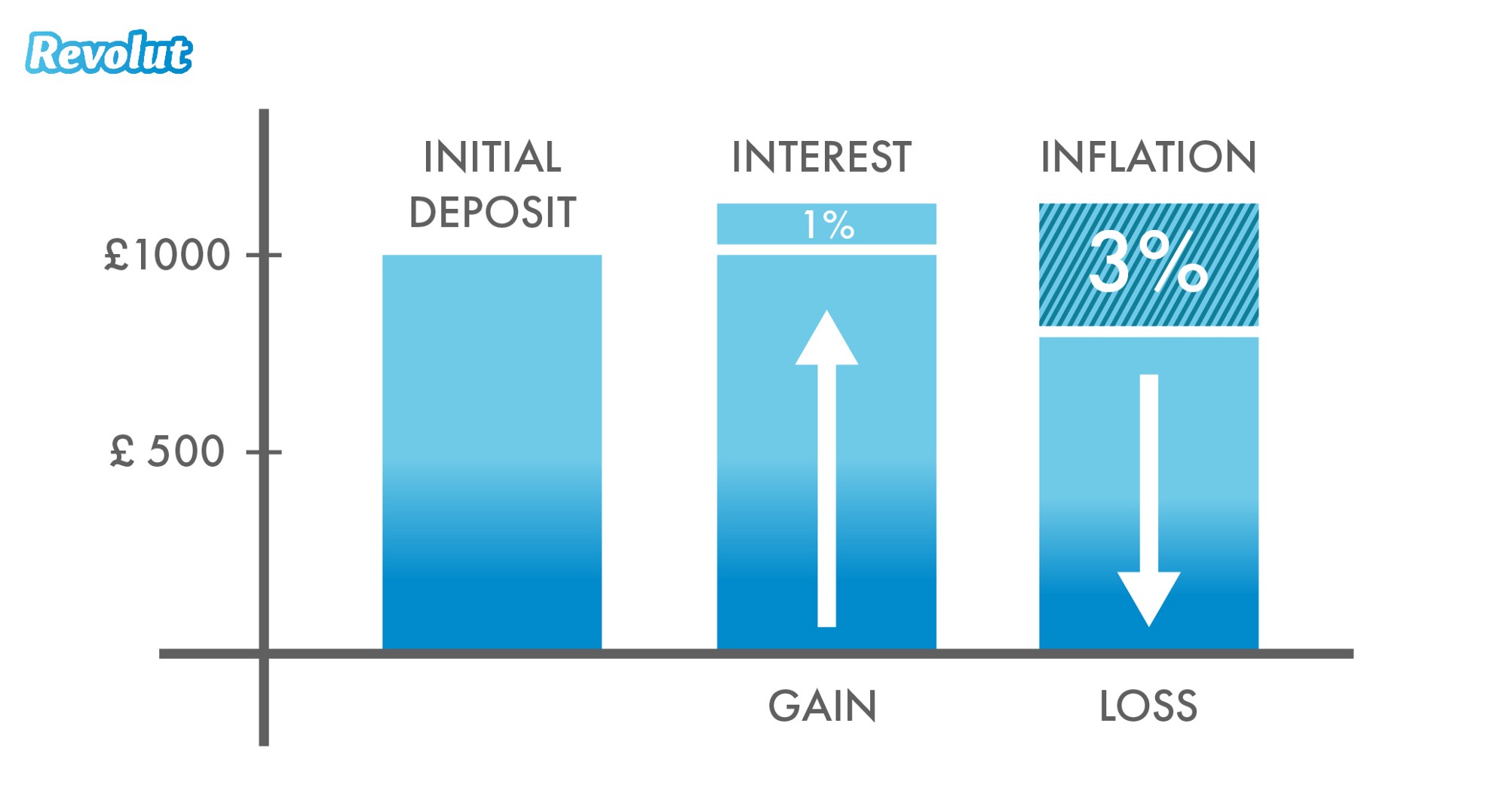 Depositing £1000 into a 1% savings account would normally earn you £10 in interest after one year. However, since inflation will devalue your money by up to 3%, in a year’s time, your initial deposit plus any interest accrued will only be worth around £980. This is less than what you’ve deposited in the first place, which means you’ve essentially lost money!

What have I learned?

Inflation is a double-edged sword — it helps the economy grow but it also pushes prices up. Inflation can make borrowing more affordable but it can also hurt savers on lower interest accounts.

Recurring payments allow you to make regular transfers to Revolut users, as well as to other bank accounts. Whether it’s your regular TV subscription, payments to family members or your monthly rent, we’ve got you covered!

What is inflation and how does it affect me?
Get the App