If you’ve ever spent time binge-watching Netflix or catch-up TV, you may have come across popular series like Narcos, Ozark and McMafia, and you may have asked yourself, 'What is money laundering?'.

But what you might not know is that these programmes are based on real-life events, more specifically, some of the biggest money laundering cases in history.

What is Money Laundering? 💰

Just like with examples of money laundering on TV, real-life criminal organisations are constantly coming up with more creative ways to convert their illegal proceeds into legitimate money through the use of cash businesses, low value electronic payments or cryptocurrency proxies.

The practice of making illicit funds seem legitimate is known as money laundering and preventing criminals from laundering money is known as Anti-Money Laundering or AML.

Sure, but why should I care? 🤔

We’re all aware that crime is bad; it harms society and is never victimless.

When people think of crime and banks they often think of card fraud – someone stealing card details and then spending the money without the owner’s permission.

However, banks are often caught up helping criminals launder money from all sorts of illegal businesses - you can watch some of these in Netflix’s ‘Dirty Money’ that involves some familiar big-name companies. 🏦

Luckily, the international community has taken action to deter such practices from happening again.

📖Hey there! Don't forget to Subscribe to our blog 👌🏻

How can money laundering be prevented? ✋

In 1989, the Financial Action Task Force (FATF) was established by the Organisation for Economic Co-operation and Development (OECD). Its remit was to look at the growing problem of money laundering and to think about how it could be better prevented.

The FATF came up with a series of 40 recommendations, last revised in 2012. In total, 180 countries now follow these guidelines and have implemented them into their national laws. These laws require certain organisations, like banks, to have systems and controls in place to detect and prevent financial crime.

Every few years the FATF runs a worldwide inspection to make sure each country is doing a good job at tackling money laundering.

It’s a bit like a few of the people in your class at school checking your homework, which is then checked by everyone at school. But, if a country gets a bad grade, it makes it much harder for them to conduct international business.

As a result, each country has regulators who make sure the systems and controls are working well.

Currently, Revolut abides by UK laws and regulations, and operates under the watchful eye of the Financial Conduct Authority (FCA). But as we expand, we’ll also have to follow the laws of other countries too. If we don’t, we can be hit by serious fines or risk being closed down, which will make it nearly impossible for our partners (or anyone else for that matter) to work with us. So, just on this level alone, it’s really important to us that we’re doing a good job.

What does money laundering data tell us? 📊

In the grand scheme of things, fines or the threat of losing our partners is not the only reason we’re serious about Revolut becoming a leader in anti money laundering. There are other major concerns that drive our AML efforts, but before we get there, let’s look at the amount of money produced by illicit activities: 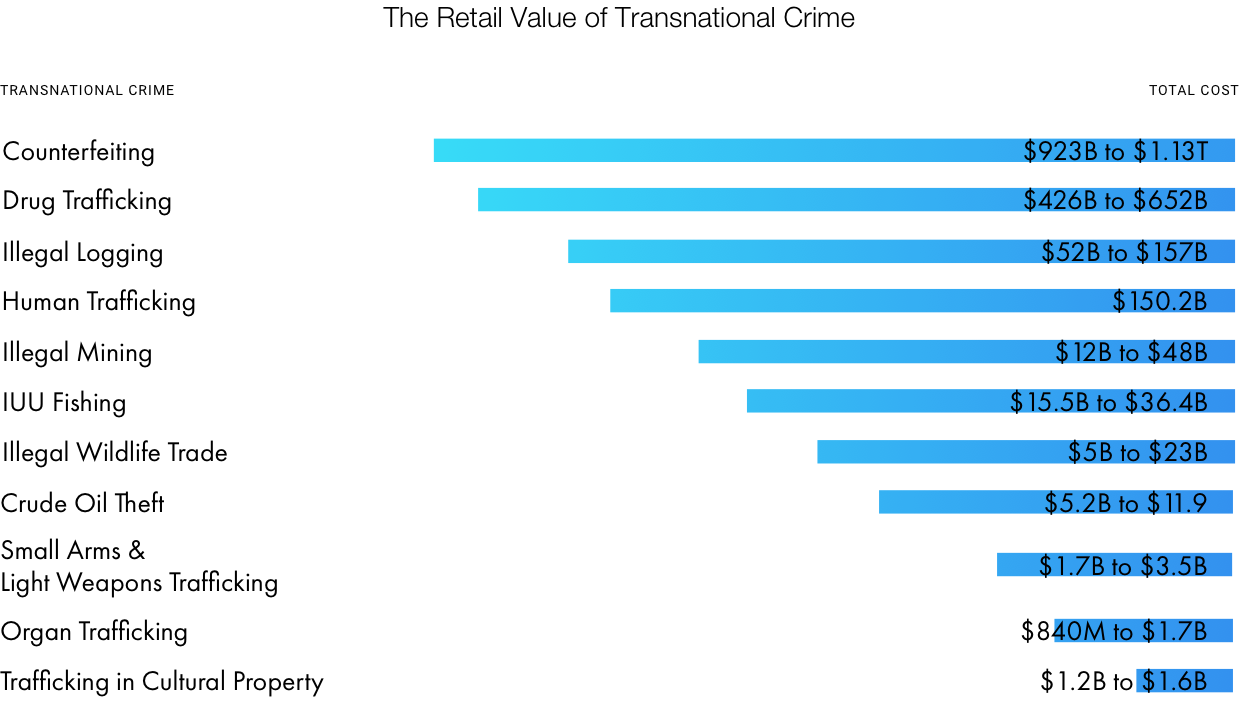 These figures are astronomical, but what you may not know is just how interconnected all these seemingly different types of crimes are. 🔄

For example, buying a fake watch from a street seller when you’re on holiday is far from an innocent purchase. Believe it or not, buying fake goods can aid human trafficking, smuggling, child labour, drugs, and even fund terrorist activities - there is a great TED Talk video covering this topic.

Criminal gangs now work together to commit crime and share the proceeds, making it even more important to find it and stop it. 🚔

Here’s another statistic for you - there are currently around 40 million people in the world living in slavery at the moment, held against their will, living in terrible conditions, with no life of their own. There are now more people caught up in modern slavery than at the height of the slave trade a couple of hundred years ago. Just think about that for a second:

There are 40 million slaves in the age of the internet, social media and challenger banks. This is why anti-money laundering is a top priority for us. 💪

Overall, this generates around $150bn in yearly profits for criminals and their organisations. This money often makes its way into the hands of the criminals via the banks, with or without their knowledge.

So, there is an important social and ethical reason for stopping money laundering, not just regulations or fear of losing business. At Revolut, we believe in doing the right thing, and so a lot of effort goes into preventing our products being used for illegal activities.

So, how does Revolut handle AML? 👮‍♂️

Like all financial institutions, we follow the rules and guidelines set out by the regulators and other important bodies. This includes making sure we:

📖Still here? Then you really need to Subscribe to the blog 😎

We also run advanced software that detects unusual behaviour. This might help to uncover fraud, flag potential money laundering or expose illicit activity. Much as we might want to, we can’t tell you how this software works but we can say it’s pretty cool and very smart – our data scientists have been busy! 👩‍🔬

As we’ve shown, the effect of money laundering on our society has implications reaching far beyond the scope of financial crime, affecting millions of people from around the world.

As a leader in the digital banking space, Revolut is committed to pushing the boundaries of combating financial crime and preventing money laundering by challenging the norm and proposing disruptive approaches to tackling injustices against the world we all live in.

💡Now that you know how we stop criminals from moving money around the world, learn how your money actually travels through the financial system 💸

Whether you’ve spent one too many nights heckling at Dragons Den, thinking you could do better, or you’ve already quit your job - taking the leap to becoming an entrepreneur and

Your inbox may have been flooded with a bunch of emails from different companies asking you to take note of some changes to their privacy policy or update your data preferences, but where

What is money laundering and why should we care?
Get the App